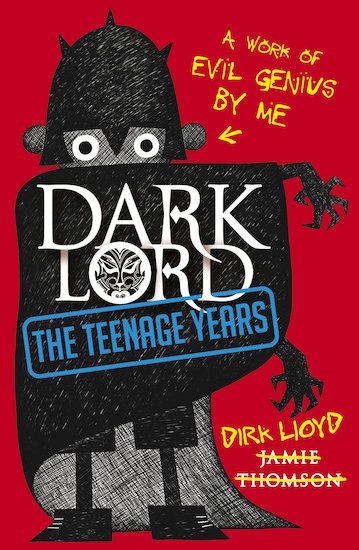 Thirteen-year-old schoolboy, Dirk Lloyd, has a dark secret – in fact he is a dark secret. Dirk – according to his own account – is the earthly incarnation of a Dark Lord, supreme ruler of the Darklands and leader of great armies of orcs and warriors, intent on destruction and bloody devastation. Following a colossal final battle between the forces of good and evil, the Dark Lord was defeated and hurled by his arch-foe’s spells into the Pit of Uttermost Despair. At the bottom of the Pit lies…a supermarket car park in the municipal town of Whiteshields, somewhere in modern day England. And when he is found, and tries to explain that he is the Dark Lord, people think he means Dirk Lloyd. The fact that he’s trapped in the puny body of a schoolboy doesn’t help. And so begins Dirk’s battle to recover his dignity, his power, and his lands… Along the way he faces the inconvenience of being fostered by a do-gooding family, the Purejoies; the torture of endless hours of drudgery at the Whiteshields Brainwashing Centre (aka school); a vengeful Headmaster; two interfering Psychotic Persecutors (psychotherapists); and constant laughter and disrespect when he attempts to marshall his lackeys and lickspittles (friends) to do what he wants them to.

Dirk makes friends with the son of his foster family, Christopher, and the local Goth Girl, Sooz, and together they attempt to cast a spell that will transport Dirk back to his homeland. Inevitably, not everything goes to plan… But that’s for book 2

5325 in Books and Resources for Schools Catalogue 2022

END_OF_DOCUMENT_TOKEN_TO_BE_REPLACED
How do I use promotional codes