Six Words and a Wish 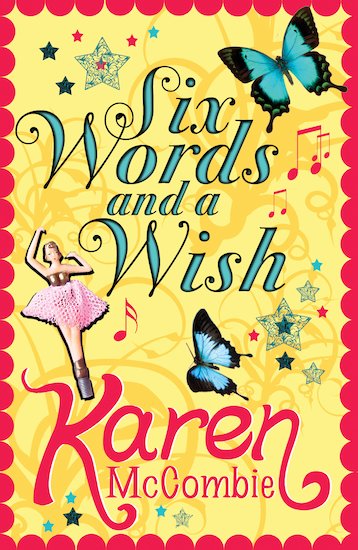 Ever since Jem’s sister Gracie ran away from home, Jem has wondered whether she’s to blame. Something she said to Gracie before her disappearance is preying on her mind. Jem couldn’t be the reason why she vanished, could she? But one summer, a series of strange and spooky coincidences makes Jem wonder if there’s more to the real story. Can Jem find out the truth behind her big sister’s disappearance? Will Gracie ever come home? Surprises and secrets transform Jem’s summer in this wonderful novel from a million-selling queen of girl’s fiction, which mixes genuine bursts of sweetness with a serious real-life theme.

900L Lexiles are the global standard in reading assessment. They are unique as they are able to measure a child and a book on the same scale – ensuring the right book gets to the right child at the right time.

Karen McCombie is from Aberdeen but now lives in North London with her husband and four fat cats.

Karen is now a full-time writer but before that she worked for several teen magazines such as J17 and Sugar in a variety roles – everything from Fashion Editor to Features Editor!

Her highly successful series is Ally’s World. Ally Love is thirteen and lives with her weird family in a falling down house in Crouch End. Her eccentric mother’s not around so it’s just Dad, the four Love children and an array of pets including a three-legged cat, a vicious hamster and some stick insects.

When not writing Karen spends her time belly-dancing!