by The Kao (author and illustrator) 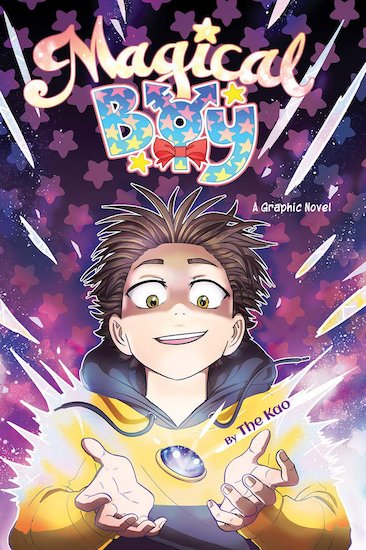 Read what our editors think

A breathtakingly imaginative fantasy series starring Max – a trans high school student who has to save the world as a Magical Girl … as a boy! Although he was assigned female at birth, Max is your average trans man trying to get through high school as himself. But on top of classes, crushes and coming out, Max’s life is turned upside down when his mom reveals an eons old family secret: he’s descended from a long line of Magical Girls tasked with defending humanity from a dark, ancient evil! With a sassy feline sidekick and loyal gang of friends by his side, can Max take on his destiny, save the world and become the next Magical Boy?

My February Book of the Month for children aged 11 and over is Magical Boy. Max has enough on his plate trying to get through school, with classes, crushes and coming out as trans. But on top of all that, his mum reveals an aeons-old family secret: he’s descended from a long line of Magical Girls… and he’s next in line! His life is turned upside down as he is tasked with defending humanity from a dark, ancient evil. With a sassy feline sidekick and loyal gang of friends by his side, can Max take on his destiny, save the world and become the first Magical Boy?

This is the first in a new series by The Kao, an illustrator and comic artist known for his online web series. Magical Boy too began as a webcomic where it won the Prism Award, given for excellence in LGBTQ+ comics. It is a hilarious and heartfelt riff on the magical girl genre made popular by teen manga series’. Magical Boy is also a full-colour graphic novel, making it easily accessible and engaging for especially reluctant readers. This breathtakingly imaginative fantasy series is really one-of-a-kind that kids will love.

END_OF_DOCUMENT_TOKEN_TO_BE_REPLACED
How do I use promotional codes