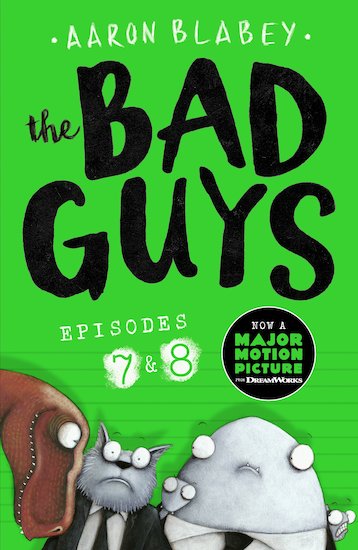 Two Books in one! Episodes 7 & 8 in the hit Bad Guys series – soon to be a feature film animation.

“I wish I’d had these books as a kid. Hilarious!” – Dav Pilkey, creator of Captain Underpants and Dog Man They sound like the Bad Guys, they look like the Bad Guys… and they even smell like the Bad Guys. But Mr Wolf, Mr Piranha, Mr Snake and Mr Shark are about to change all of that — whether you want them to or not! EPISODE SEVEN: DO-YOU-THINK-HE-SAURUS?! The Bad Guys have flown through outer space, made it back to Earth, and managed to land in exactly the right place … but exactly the wrong TIME. Who knew alien escape pods were capable of time travel?!? And now that they’re 65 million years in the past, they must avoid being eaten by dinosaurs and fix their broken time machine if they ever want to get back home before an evil alien destroys the whole world!This super special edition also includes a hilarious original short story following evil Dr. Marmalade’s quest for superstardom, quizzes, games, and more! EPISODE EIGHT: SUPERBAD The Bad Guys have strangely acquired SUPERPOWERS! But their powers might be, well, defective. They can only do things like blow their own pants off in public. Not exactly what you’d call hero-caliber skills.Defective or not, the Bad Guys have a job to do. With Dr. Marmalade ready to destroy the world, Mr. Wolf, Mr. Snake, Mr. Piranha, and Mr. Shark finally have their chance to be (super)heroes! And this time, they may just get some help… ABOUT THE SERIES

Praise for The Bad Guys: “[T]his book instantly joins the classic ranks of Captain Underpants... We challenge anyone to read this and keep a straight face.” – Kirkus Reviews BOOKS INCLUDED IN THIS TWO BOOK BIND-UP EDITION 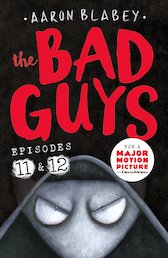