Skandar and the Unicorn Thief National Share a Story Month 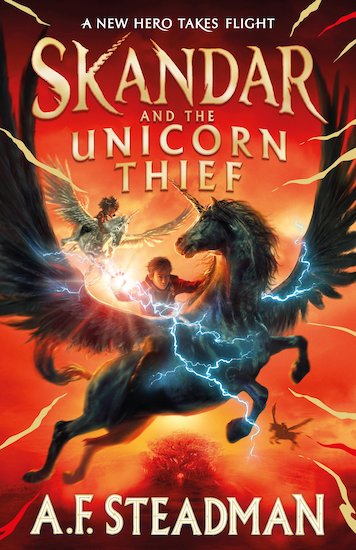 Soar into a breathtaking world of heroes and unicorns as you’ve never seen them before, in this first book in the new bestselling fantasy adventure series for children age 9+, and fans of Harry Potter, Percy Jackson and Amari and the Night Brothers. ‘Steadman . . . has created an engrossing world that certainly brings to mind JK Rowling, Philip Pullman’s daemons and Veronica Roth’s Divergent series.’ – The Times Children’s Book of the Week ‘Pacy, enthralling and epic, a gripping read.’ – Louie Stowell, author of Loki and Otherland ‘A dazzling feat of imagination. I loved every breathless moment of it!’ – Cat Doyle, author of The Storm Keeper’s Island and co-author of Twin Crowns ‘The best book I’ve ever read.’ – Patrick, age 10

Thirteen-year-old Skandar Smith has only ever wanted to be a unicorn rider. To be one of the lucky few selected to hatch a unicorn. To bond with it for life; to train together and race for glory; to be a hero.

But just as Skandar’s dream is about to come true, things start to take a more dangerous turn than he could ever have imagined. A dark and twisted enemy has stolen the Island’s most powerful unicorn – and as the threat grows ever closer, Skandar discovers a secret that could blow apart his world forever . . .

Get ready for unlikely HEROES, elemental MAGIC, sky battles, ancient secrets, nail-biting races and FEROCIOUS UNICORNS, in this EPIC ADVENTURE series that will have your heart soaring.

Praise for Skandar and the Unicorn Thief:

‘My book of the year. Not since Harry Potter have I felt this excited about a series. Readers are sure to be clamouring for the next book. You’ll never look at unicorns the same way again, nor will you want to!’ – Dominique Valente, author of the Starfell series

‘Never have unicorns been so ferocious, fearsome and thrilling! A fantastically gripping read!’ – Laura Ellen Anderson, author of Amelia Fang and Rainbow Grey

‘A magnificent book. I raced through it – at turns enthralled, delighted, amazed. It’s everything I could have wanted and more. No doubt this book is going to fly.’ – Hannah Gold, author of The Last Bear

‘A. F. Steadman has created a stunning new world that feels both familiar and fresh, with a cast of characters that will stay with you long after you’ve finished reading.’ -Tola Okogwu, author of Onyeka and the Academy of the Sun

‘A fresh new voice brimming with imagination and crackling with excitement. These bloodthirsty unicorns will take you on a ride you’ll never forget!’ – Benjamin Dean

‘A fantasy adventure of epic proportions by a superstar author. I loved everything about it from the elemental magic, to the treehouses, and unique unicorn twist. Skandar and the Unicorn Thief is going to be the start of everyone’s new favourite series.’ – Aisha Bushby

‘Skandar and the Unicorn Thief takes you on a great adventure from bloodthirsty unicorns to duels in the air. This MG is a must-read and you won’t be disappointed.’ – Rachel Faturoti

‘An absolute triumph. I gasped at every chapter . . . It has everything I love in a good book.’ – Mel Taylor-Bessent, author of The Christmas Carrolls and Director of Authorfy

END_OF_DOCUMENT_TOKEN_TO_BE_REPLACED
How do I use promotional codes