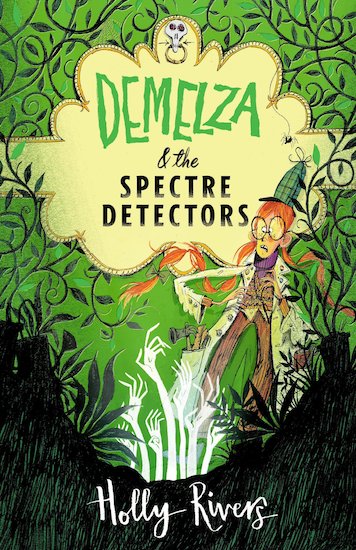 Full of warmth, eccentricity, humour and plenty of action, DEMELZA & THE SPECTRE DETECTORS is the debut novel from the multi-talented Holly Rivers, who played Drusilla Paddock in ITV’s original Worst Witch series! ‘Talking skulls, family feuds, red herrings and a spirited (in every sense) heroine underpin this funny, fizzing debut that also acknowledges the madness of grief.’ DAILY MAIL

‘Demelza doesn’t believe in ghosts! She doesn’t even believe in the afterlife. This inner conflict enlivens Rivers’ humorous fantasy, as Demelza is forced to apply her logical mind to problem-solve the strangest occurrences and defeat the most ephemeral of nemeses. This gives the book a broad appeal, which both STEM and sci-fi lovers will warm to.’ IRISHTIMES

Demelza loves science – she loves it so much that she stays up late to work on her inventions.

But she soon discovers she’s also inherited a distinctly unscientific skill: Spectre Detecting. Like her grandmother, she can summon the ghosts of the dead.

But when Grandma Maeve is kidnapped, Demelza and her pasty-faced best friend, Percy, must leap into action to solve the deadly mystery …

As a child, Holly was a lead actress in ITV’s original Worst Witch series!

Check out Holly’s second book: The Boy in the Post

810L Lexiles are the global standard in reading assessment. They are unique as they are able to measure a child and a book on the same scale – ensuring the right book gets to the right child at the right time.

END_OF_DOCUMENT_TOKEN_TO_BE_REPLACED
How do I use promotional codes