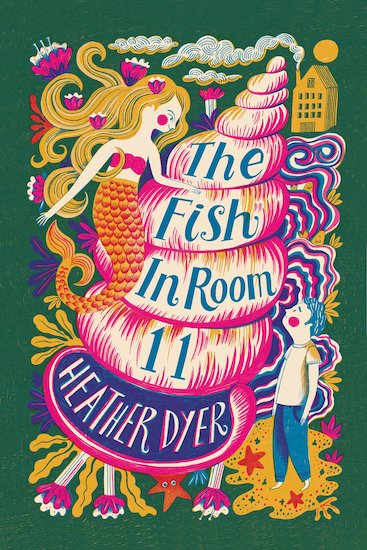 Toby lives a lonely life at the seaside hotel where he was abandoned as a baby – until he finds a girl lying on the beach at the water’s edge, with a long green tail swaying gently in the shallows. Eliza Flot is a stranded mermaid and she needs Toby’s help. But Toby’s new friendship arouses suspicion back at the hotel. Toby and the Flots must come up with a plan to rescue each other .

Heather Dyer is the author of The Boy in the Biscuit Tin, The Girl with the Broken Wing, and The Fish in Room 11. She was born in 1970 in Scotland, spent most of her childhood in Wales, and also lived in Canada in a cabin by a lake. After school she spent several years working in different countries doing things like cherry picking and working in hotels.

Heather’s books are about ordinary children to whom something extraordinary happens. In The Fish in Room 11, Toby finds a mermaid living under the pier. In The Boy in the Biscuit Tin, Ibby, Alex and Francis find a magic set that does real magic. The Fish in Room 11 received the Highland Children’s Book Award in 2006. The Girl with the Broken Wing was one of Richard and Judy’s ‘Best Children’s Books Ever’ in 2007, and The Boy in the Biscuit Tin was nominated for the Galaxy Best British Children’s Book Award in 2008.

Heather’s favourite books by other authors include The Magician’s Nephew by C.S. Lewis and The Ogre Downstairs by Diana Wynne Jones. Her advice for budding authors is to ‘read a lot. Try reading all kinds of books, but you don’t need to finish them if you’re not enjoying them. If you keep writing whenever you can, not worrying too much about whether it’s any good or not, bit by bit you will become a good writer.’

END_OF_DOCUMENT_TOKEN_TO_BE_REPLACED

Get 10% off when you order 10+ copies of one of our end of term picks. Offer applies to books in our 'end of term gifts' selection only. Offer ends 12th July. Cannot be used in conjunction with any other offer. Excludes purchases made using Rewards.

END_OF_DOCUMENT_TOKEN_TO_BE_REPLACED

Get an additional 20% off when you order 30+ copies of one of our end of term picks. Offer applies to books in our 'end of term gifts' selection only. Offer ends 12th July. Cannot be used in conjunction with any other offer. Excludes purchases made using Rewards.

END_OF_DOCUMENT_TOKEN_TO_BE_REPLACED
How do I use promotional codes