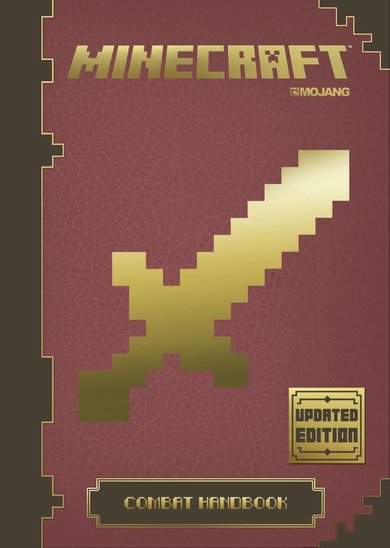 Buy this and your school gets £1.80 to spend on books Orders of £10 or more will earn 20% of your order value back in Scholastic Rewards for your school.

Check out the brand new series of official Guides. The first four titles in the series, Guide to Exploration, Guide to Creative, Guide to Redstone and Guide to the Nether and the End, publish in 2017.

Minecraft is a multi-platform block-based gaming sensation available on Xbox, PlayStation, PC and mobile devices. Whether you’re in Creative, Survival or Hardcore Mode, the Minecraft books contain all the advice you need to survive and thrive!

In Minecraft, you’re never alone! There are dangers lurking around each and every corner. The Minecraft Combat Handbook is essential reading for Minecraft warriors.

In Survival mode the threat of attack is constant. Zombies, monsters, and witches are on the prowl. Fall foul of a creeper and it’s game over! This handbook will teach you how to defend your home, build a fort, set cunning traps, thrive in PVP (player versus player) mode, evade death in the Nether, and battle the dreaded ender dragon in the mysterious End dimension.

Handily this handbook has profiled all the Minecraft Mobs so you know exactly what you’re up against. Mobs are divided into five different types: Neutral, Passive, Utility, Boss, and Hostile. Fighting hostile monsters is the best way to kit yourself out with supplies for future combat. You’ll always be six steps ahead by anticipating a monster’s attack strength and knowing their vulnerabilities. You will also discover where they are found and what methods they will employ to kill you.

Once you get to the End, be prepared for awesome adventure and some serious combat. The ender dragon is ferociously aggressive, and there’s nowhere to hide.

In this perilous world of mobs and monsters, The Minecraft Combat Handbook might just save your life! Perfect for minecrafters aged nine upwards.

Collect all of the official Minecraft series to become the best Minecrafter you can be, including the brand new Minecraft Guides:

Minecraft: The Survivors’ Book of Secrets